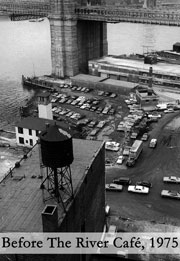 History of The River Café

The River Café opened in June of 1977 in a forgotten and abandoned neighborhood by the Brooklyn docks – desolate except for trucks waiting to enter the piers. When Michael “Buzzy” O’Keeffe first discovered this spot, it was barren and devoid of life. To him, this neglected piece of waterfront was very special – lacking any civility, but with wonderful possibilities.

It took twelve years of convincing the City before Mr. O’Keeffe obtained approval in 1974 to begin building the restaurant. Some of New York’s most important business executives and government officials advised Mr. O’Keeffe that building on the Brooklyn waterfront was extremely dangerous. In 1974, New York City was itself struggling with financial problems, and the idea of creating a serious restaurant in one of NYC’s forgotten industrial districts was beyond crazy.

From the restaurant’s first days, Mr. O’Keeffe has insisted that The River Café be dedicated to serving only the highest level of cuisine prepared from the freshest and finest ingredients available anywhere. As a result, the restaurant emerged at the forefront for the arrival of Classic American cuisine on the East Coast, searching out the finest and purest ingredients in every aspect. 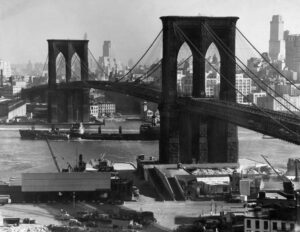 While The River Café has produced many culinary firsts (e.g. the term “free range chicken” was invented here under Larry Forgione), no other American restaurant has produced as many world class chefs – Larry Forgione, Charlie Palmer, David Burke, Rick Laakkonen and Brad Steelman.

The River Café has been celebrated with numerous accolades including: a Michelin Star, The Restaurant Hall of Fame Award, The “Ivy Award of Distinction” from Restaurant and Institutions Magazine, Distinguished Restaurants of North America Award (DiRoNA), The New York Parks Council Award, The Municipal Arts Society Award, The “Wine Spectator Award of Distinction” from Restaurants and Institutions Magazine, The Wine Spectator Award, selected by the French culinary guide, “Gault Millau,” as one of the five best restaurants in New York.

We use cookies on our website to give you the most relevant experience by remembering your preferences and repeat visits. By clicking “Accept”, you consent to the use of ALL the cookies.
.
Cookie SettingsAccept
Manage consent

This website uses cookies to improve your experience while you navigate through the website. Out of these, the cookies that are categorized as necessary are stored on your browser as they are essential for the working of basic functionalities of the website. We also use third-party cookies that help us analyze and understand how you use this website. These cookies will be stored in your browser only with your consent. You also have the option to opt-out of these cookies. But opting out of some of these cookies may affect your browsing experience.
Necessary Always Enabled
Necessary cookies are absolutely essential for the website to function properly. These cookies ensure basic functionalities and security features of the website, anonymously.
Functional
Functional cookies help to perform certain functionalities like sharing the content of the website on social media platforms, collect feedbacks, and other third-party features.
Performance
Performance cookies are used to understand and analyze the key performance indexes of the website which helps in delivering a better user experience for the visitors.
Analytics
Analytical cookies are used to understand how visitors interact with the website. These cookies help provide information on metrics the number of visitors, bounce rate, traffic source, etc.
Advertisement
Advertisement cookies are used to provide visitors with relevant ads and marketing campaigns. These cookies track visitors across websites and collect information to provide customized ads.
Others
Other uncategorized cookies are those that are being analyzed and have not been classified into a category as yet.
SAVE & ACCEPT